Similarly to our kid press conference video from 2017 that garnered 1.5 million views through Facebook, we hoped to rekindle the magic in 2018. Our team had elementary school students create portraits of Roger Federer for him to critique in person. His interaction with them ended up working as a condensed piece. The video ends with Roger walking the kids down to a professional mural unveiling of him on the side of Stadium One inside the tennis garden.

The second piece featured here is a kid press conference starring Novak Djokovic. Novak, who is currently experiencing a slump while recovering from an elbow injury, requested to star in a kid press conference similarly to Roger’s 2017 rendition. Novak has long been the villain to both Roger and Rafa. I have seen him booed at Indian Wells and the US Open. Novak is booed, not for his character, but because he’s often been the one stopping Roger from capturing more titles. From 2013-2016 Novak was incredibly dominant. But that dominance did not come with a Nadal or Federer-like adoration from a global fanbase. Maybe only now that he is struggling, fans will get behind him as an underdog to champion. It seemed like he used this press conference as an opportunity to espouse his personal moral philosophy, rather than as a time to relax and cut loose. That sincerity and seriousness ended up making the piece somewhat difficult to edit. It is interesting comparing the two press conference videos from 2017 and 2018. The first became our most viral hit of all time. The second earned a paltry 6.5k views on Facebook before Novak lost in the second round of the tournament. One cannot help but feel for Novak. He may have made over 110 million in prize earnings and inked a new sponsorship deal with Lacoste, but he’s not Roger. Roger seems to singlehandedly carry the sport of men’s tennis. For most fans, even the third-winningest active male tennis player in a video with cute kids is not enough of a draw.

I enjoy shooting the trophies for tennis tournaments. I like trying different moves, shots and editing techniques that keep the pieces fresh and watchable for the viewers/fans. This year I tried three new things. In addition to using a MoVi M5 gimbal to capture a pushing in shot, we tried in-camera light leaks using a prism. I would wave the prism in front of an 85mm f/1.2 lens. This creating transition points and ideally a classy bit of visual interest. To get the mountains to move behind the trophy, we used a 70-200mm lens on a 42″ Rhino Slider with the Rhino Arc. This combination allows an operator to program a specific move so that the subject (the trophy) always remains in the same position in the frame, but the background spins. This is called a parallax effect. To further compound the amount of movement in a shot of an object that is typically static, I brought a motorized weight-bearing turntable. The turntable spun the trophy in place while the camera slid along the track turning to create parallax.

I love the view of the San Jacinto Mountains from the tennis garden. The colors and the light change throughout the day. That view has such great depth. The supporting non-trophy broll in this piece was shot using the Inspire 2 drone paired with a 45mm lens. The X5s camera is a crop sensor, there’s a 4k crop too and then when you push into a 4k ultra high definition image for a 1920X1080p timeline, it means you’re essentially flying smooth shots with a 200mm lens. It’s one of the most effective and versatile ways to get telephoto aerials. Indian Wells is one of the best places to fly.

The western showdown music is also a track that I licensed and have held onto for years in the hopes of using it at Indian Wells eventually.

Indian Wells marked Serena’s first return to the tour since giving birth in 2017. Serena Williams is often discussed as the greatest female tennis player of all time. She was eight weeks pregnant when she won the Australian Open last year. She holds 23 Grand Slam titles. Her playing the BNP Paribas Open was big news in tennis. Serena ended up facing her sister, Venus in the 3rd round and lost. She definitely looked slower on court than in the past. But it was still a very exciting match. It’s always fun to watch the Williams sisters slug it out.

Here are three pieces T&T produced. The first two were filmed and edited by Ian Davidson. The third by Drew Carlisle. Because the WTA, ATP, Tennis Channel and ESPN were all giving the sisters a lot of coverage, I cut the third piece in black and white to make it stand out. We also began experimenting with a 4:5 aspect ratio for Instagram and Facebook. When a video is taller than it is wide, it takes up a lot more real estate on an iPhone newsfeed. Below are the original 16:9 versions of these pieces.

I’m grouping two different videos together in this entry because they fall under what I think of as more general around-the-ground news reporting at a tennis tournament. Wolfgang Puck’s restaurant, Spago, has a location inside Stadium One that is only open during the tournament. He was in town watching some tennis, checking on his chefs, his recipes, doing media to promote his restaurant etc. We covered him as the tournament and the piece played on some social media channels but was primarily meant to be played on the large video boards inside Stadium One and Two (jumbotrons).

Likewise when Vanna White and Pat Sajak were on location filming bits for “Tennis Week” on Wheel of Fortune, we produced a piece for social media. But it was more so intended for in-stadium viewing for the 440,000 fans in attendance during the two weeks. 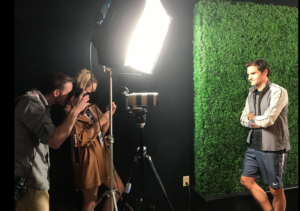 To rotoscope video is to trace over each frame creating a cartoon. The cartoon bares a remarkable photo-realistic quality because that’s exactly what it was derived from. For this piece, the tournament was hedging that Federer would win a fifth title at Indian Wells. I was hired to spend a week tracing frames of video to create the animated sequences within the below piece. The hand drawn quality is intended to immediately catch the viewer’s attention. Rather than an average action highlight, the video should transcend to be a more memorable piece. The tracing and animating took approximately one week. The video was completed pre-tournament. The footage of Federer winning was inserted right after it happened on the last day of the BNP Paribas Open 2017.

This is a piece created for Indian Wells back when Novak was still number one in the world and seemed unbeatable. Tennis seems to lend itself well to highlights cut to wild electronic music. Shaking the picture digitally, playing with the speed ramping is all in good fun. I like the closing shot here that goes day to night with a hard cut to the music.

A few years ago at Indian Wells I started making “mini-movies.” Essentially these are cinematic highlights. I would letterbox them and shoot with the intention of a wider filmic look. Fans seemed to like the look. But I learned quickly to focus on the most popular players in the sport. As an employee of the tournament, my goal is always to get as many eyeballs captivated into staying within the tournament ecosystem. Making a video on Roger in this case is purely fan service. But even though I knew it would get clicks because of who it starred, my secondary goals were to show off the grounds in a manner never done before, to capture the highest quality footage, and to find the best real soundbites by listening to all of his interviews and press conferences from earlier in the week.

With that said, what is most significant about this piece is the music. At Tried & True we wanted to try something different that had never been done before. Our sound engineer doubles as a composer. We carefully recorded the audio of our local college tennis team (Winthrop University), isolating serves, bounces, backhands etc. These sfx were then used in Cubase, music composition software, as the drum kit for a song. Joe Miller, our afore mentioned audio guru, and I discussed the action of the video. How it might start, rising action, where soundbites might fall and so on. He constructed the piece using a Moog synthesizer, electric guitar in addition to a number of electronic elements and samples. The track turned out well as an example of a fully immersive and synergistic viewing experience. The music absolutely ads to the video and the enjoyment for the viewer.