Above is a reel consisting of our very best footage from the past two years working for the USTA. It is cut to a dubstep track because the music allows me as an editor to fit more content into the edit with quick cuts while still keeping the duration to 2min. I did also cut a 1min version for Facebook and made a square aspect ratio for Instagram.

At the US Open I am hired to cover match action during the second week in Arthur Ashe Stadium. The first week of the tournament was spent filming interviews of players doing promos for The Hopman Cup and The Australian Open for Tennis Australia. After the TA work was finished I transitioned over to the USTA.

This tournament is loud and very New York. Grand Slam tennis tournaments each have a different atmosphere. I like filming in Ashe. You can hear the train, the planes flying into LaGuardia. The patrons are rowdy/boisterous too. I like going up into the stands, getting tilt shift lenses out to make miniatures in the world’s largest tennis stadium. It’s fun to shoot Manhattan from Queens. The access is excellent. During a match I cover the entire stadium but mostly remain in the pit switching lenses depending on where we are in the match.

But almost every point is covered and the USTA uses that footage throughout the year in ticket package promos, in-stadium highlights, and during the Open in daily recaps. Their editors work almost all night after a match ends to turn the piece around before the grounds open the next day. I really like this job. It’s exciting. There’s a lot of adrenaline and pressure to capture the shot in the moment. At other tournaments the AELTC or FFT is not counting on me to get the Championship Point at Wimbledon or the French Open. The USTA by contrast will end up using my clip possibly for years to come.

I was really pleased that that USTA picked the above video as their year-end closer on social media.

Tennis Australia approached us to cover a team announcement for The Laver Cup at a JP Morgan skyscraper on Madison Avenue in Manhattan. Members of Team Europe and Team World were present. Our second shooter for the day was Tried & True’s Ian Davidson. We arrived two hours in advance of the event to scout the rooftop location and test audio for the press conference portion of the morning.

We had the objective of trying to make The Laver Cup piece appealing to a younger audience, making the video playful, finding a New York sounding track while retaining the air of a classy affair. We filmed from 9am-1pm and I edited a VNR (video news release) for Australian television that afternoon. That night, I created this same-day-edit that was released on all Laver Cup platforms immediately. The piece made it through multiple rounds of revision, I hit send from the airport lounge in LaGuardia the next day and we successfully became the last piece of tennis news before the US Open draw. (The US Open sucks up all media attention at the end of August and beginning of September).

It was quite a day riding elevators with tennis stars to a rooftop one-thousand feet above sea level to film them playing around against the Manhattan skyline. 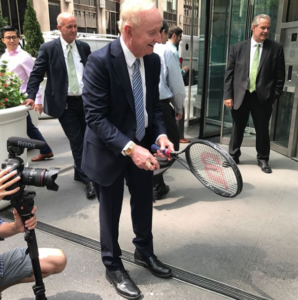 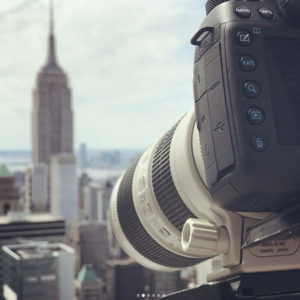 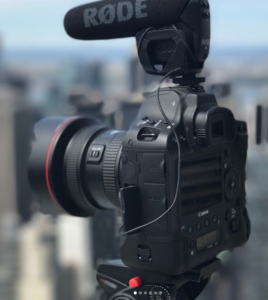 Pictured above are our cameras filming timelapses of the city and Ian capturing a shot of tennis legend Rod Laver hitting a ball into the glass revolving door.

It was time for me to make an end-of-year wrap up video at Indian Wells for 2017. Rather than retrod the same type of highlight that I had done for years previous, I wanted to make a unique statement. We tapped Andrew Krasny, the gravely voiced on-court host at Stadium 1. Andrew is well-known in the sport as a host of Court Report on the Tennis Channel He could successfully anchor the piece with gravitas and some bite. When recording him, I instructed Andrew to read the copy I wrote (that had been edited by our head of PR and approved by our marketing director) with cocky malice. Like Kevin Spacey as Frank Underwood without the faux Charleston accent. When Jon Hamm does Mercedes commercial voiceovers he says, “the best or nothing.” Indian Wells strives to be the finest, most elite tennis tournament in the world. In the past the organization has pushed to be categorized as a Super Masters 1000; in a league above all tournaments and just below the grand slams. Indian Wells is exceptional in location, amenities, access to the players and accessibility for patrons. Plus no other tennis tournament boasts both a Nobu and Spago branch.

Post tournament this video has been used as the Facebook cover photo video for the BNP Paribas Open too.

At the US Open I am contracted to shoot match action in Arthur Ashe. The staff for video is enormous compared to other tennis tournaments. It is after all the largest annual sporting event in the world. Over the two weeks they draw 3/4 of a million spectators. The USTA has a crew logging and tagging video as it is ingested to the servers. Their talented editors may pull from an number of sources for their daily recaps and sizzle showdowns. It is an impressive feat to pull off. That’s SO much data coming into their system, being organized and being created into content on an hourly basis. The USTA cranks out product like no one else. Below are two sample videos where my match action footage was used heavily. Kudos to my boss Matt Guerra. He always delivers an energetic v/o for the Westin sponsored sixty second recaps. 🙂